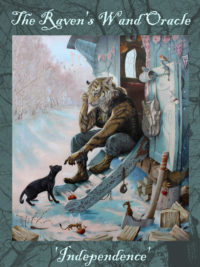 2018 sees the release of The Raven’s Wand Oracle Deck, featuring 44 pieces of my Wildwood art. I thought I’d give readers a look at what goes on behind the scenes during the creation of these works . . .

‘Can you draw me a man, but like a tiger?’ I can’t recall the exact wording but that’s how this character, Tiber, came to be. The brief was just that – brief – which suits me fine. And so I set out to draw a ‘tiger man’. At the time I was in the middle of a major commission elsewhere and had to break off for a week to complete this, which really put the pressure on. I kept looking at the clock, knowing I couldn’t afford to run over. I opted for a Siberian tiger, because I knew I wanted snow in the background, and I had great fun inventing Tiber’s little caravan. Despite all of this enjoyment, the pressure racked up. I remember it was January, and storm after storm rolled in, and the electric was on and off, and without light (and my trusty stereo) I can’t work. At one point the electric was off for 36 hours, and still the clock was ticking. I’d also just moved house, and the new place was grim and unwelcoming, and I was itching to get on with some DIY and make the place ‘mine’. So in the end, with all the odds against me, it’s something of a miracle that the image manages to capture the sense of stillness I was lacking when I drew it!