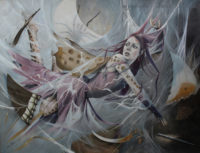 This is one of those images that came out totally different to my original idea, which was to draw a non-commercial, scary picture just for the hell of it featuring a cute fairy trapped in a spider’s web and about to be eaten: sometimes I’m just ‘bad’. But you might be wondering what changed; after all it’s a picture of a cute fairy trapped in a spider’s web and about to be eaten, is it not? Well, strictly speaking, no it isn’t. The original image I had in mind was of a child-fairy screeching in terror as the huge and very hairy spider plunges it fangs into her helpless little body (I never said I was a nice guy) but although that would have made a satisfying shock-joke image it would have lacked drama: the fairy gets eaten – end of story. Being someone who loves to draw and write too, it seemed a shame not to draw a picture with a narrative rather than a foregone conclusion, and so the image changed. . . I made the fairy older, to give her more of a fighting chance, and rather than draw the spider already tucking in, I pushed it further into the background, and then to add more impact and suspense I veiled it in a sheet of web, leaving just a pair of probing legs to tantalize (and perhaps revolt) the viewer. Lastly I offered my fairy a slim chance of survival in the shape of her fallen wand illuminated by a shaft of light, and combined with the title ‘Katrina’s Wand’, the question is will she or won’t she reach it in time? I leave that to you, but for fairy fans out there who see Katrina flitting away to fight another day, remember that spiders need to eat too. . . perhaps I ought to draw the reverse picture; of mum spider sobbing in her kitchen surrounded by starving spiderlings. Those blasted fairies!